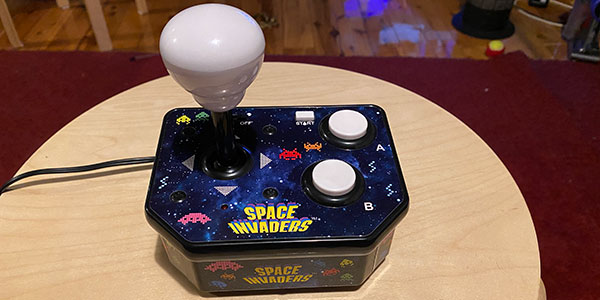 With Christmas fast approaching, retro gaming goodies are appearing on store shelves — but are they worth buying?

It’s that time of year again, when the shops start filling up with what I’ll politely call “Christmas Tat”. The kinds of things that are sometimes called stocking stuffers, but also serve double duty as secret santa gifts for the office, or just last-minute presents for that hard-to-buy-for-relative.

Of late, that’s included a lot of gear aimed pretty directly at fans of retro gaming. As regular blog readers will know, that includes me, so when I was alerted (with a tip of the hat to the always amazing ausretrogamer) that Kmart was once again selling small retro games systems, I was intrigued.

They’re all made by MSI Entertainment, and there’s a range of games on offer. I will cover them all (eventually), but figured I’d start with the game that for many was their first arcade game: Taito’s classic Space Invaders.

Straight away, I’m struck by the fact that the iconography and imagery on the box is spot on, even if some forty years on I’ve no idea what those big bear things are actually meant to be.

I mean, is there a hidden level where you’re shooting them rather than the blocky aliens?

Unlike the smaller standalone cabinet types — which they do still appear to be selling, albeit in limited numbers this year — these are plug-and-play TV games, sold essentially as a standalone joystick with an on/off switch, start button and two fire buttons. Which is a little odd for a game like Space Invaders, which only needs one, but I guess that’s what happens when you take a reference design to multiple games at once.

Taking the MSI Space Invaders TV Plug & Play Game out of the box, the first thing that will strike you is just how very light it is. There’s really nothing to it, and I’m certain if I did pull it fully open, I’d find a very small circuit board underneath.

The three AA batteries it needs to run will probably weigh more than the unit itself. I do appreciate the visual design of the labels that run around the body of the stick and on the top facing, which are clean and brightly printed.

The stick is pure plastic, as are the buttons, but then it only really needs left-right movement and one fire button. Outside Pong, Space Invaders is about as primitive as it gets.

One big downside, although it’s super-common for these TV game devices, is that it’s using composite video output.

It’s 2019. Composite video on a modern flat screen looks awful, so to compensate I plugged mine into an old-school CRT Sony Trinitron — but not everyone will be that lucky.

Mind you, the product manual does suggest plugging it into “your VCR”, and that’s equally, if not more old school! An HDMI option would be ideal — and it would make it trivial for me to capture some video from this thing!

As for the actual game, it’s rather predictably limited. It’s just Space Invaders, a single player, and there’s something odd here too. MSI, makers of all the game-in-a-stick devices K-Mart is selling has clearly licensed Space Invaders properly… but this isn’t quite “classic” arcade Space Invaders, because the actual aliens are slightly off-shape.

Now, quite how passionate you are about that level of accuracy may vary, but I find it a little odd that you couldn’t get that right. It suggests to me that they may have had the game ready before they secured the licence, and slapped it on afterwards.

Now, as with all retro products that are really there to sell at Christmastime, there’s a couple of different markets for this kind of product. Is it going to sell you on the sheer simple beauty of Space Invaders?

Probably not. It plays a fine game of Space Invaders, but there’s only one option there, and you’d get more of a flexible Space Invaders experience with, say the Atari 2600 version (which I’ve written about here) than you would with this.

As a bit of fun on Christmas day it’s fine, and for the more vintage gamer in your family there could well be some joy in a simple high score competition amongst your clan. Although Space Invaders isn’t a fast-paced game by any kind of modern standard, so you’d need patience as everyone played. Or maybe beverages to keep the family happy/inebriated (delete where applicable) while they wait.

For the retro gaming enthusiast, there’s probably more appeal in the MSI Space Invaders TV Plug & Play Game as a visual statue; to be honest that’s likely what will mostly happen with my example. There are other games in the range that’ll probably stand up a little better in terms of being engaging game examples — but I’ll start getting to those next time around.

Next time: I hop to it with the MSI Entertainment version of Frogger.