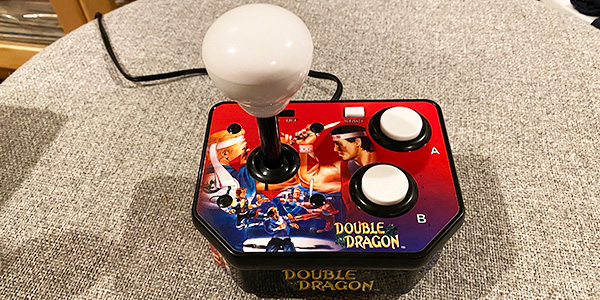 Kick, punch, it’s all in the mind… no, wait, wrong game. Time to once again get my retro game fix in with MSI’s TV game version of Technos’ classic Double Dragon.

It’s hard to explain to anyone who wasn’t around at the time just how massive Double Dragon was back in the late 1980s.

It wasn’t the first side-scrolling beat-em-up, but it absolutely was the gold standard and what’s more the game in arcades pretty much until Capcom released Street Fighter II.

Also an extremely poor movie. Which means it’s got more than one thing in common with Street Fighter II.

I played a lot of Double Dragon back in the day.

A whole heck of a lot, to the point where I could finish the arcade version using headbutts only. To give that some context, while it’s a fine move, it leaves you more open than anything else to counter-attack.

Pretty much anyone and everyone who played Double Dragon back in the day knew that the back elbow was the move of choice.

So when Kmart put its range of TV Games out for sale, it’s fair to say that Double Dragon was one of the games I was most keen to get some time with. Having moved through the years and already reviewed Space Invaders and Frogger, the next chronological entry it felt right to take on was Technos’ 1987 classic.

So, if you’ve read my earlier reviews — or even if you’ve just browsed the boxes on Kmart’s shelves — it won’t surprise you to learn that Double Dragon is built on the exact same hardware as Space Invaders and Frogger. Same floaty, slightly marshmallow-shaped joystick. Same two-button array. Same Philips head screw hiding a compartment that needs 3 AA batteries. Not included, of course.

Also, regrettably, same use of composite video output, not HDMI. If you don’t have a CRT handy to plug it into, it’s going to look pretty ordinary at best.

Now, I’ll give MSI some credit here, because they could have engaged in one of the oldest old-school game tricks in the book with Double Dragon. Way back in the day, it was rather common for game boxes to feature game art from the “best” version of the conversion, or in some cases direct arcade game stills.

That was irrespective of what the game on a given platform actually looked like, so, for example, a Commodore 64 version might have pictures on the box of the Commodore Amiga version.

MSI haven’t done that, making it very clear indeed that what you’re getting here isn’t the arcade version, the Amiga version or even the Commodore 64 version. Instead, it’s a lightly (and slightly oddly) modified version of the NES version of Double Dragon.

Here’s a weird bit of trivia.

To further add to the trivia pile, the current owners of the Double Dragon intellectual property?

That would be Arc System Works, who were the original programmers for the Sega Master System version of Double Dragon that I loved so much back in the day!

The NES version, however, was a new one to me. The NES was an interesting system, but there was no way it could handle actual arcade graphics, instead opting for more of a cartoon style that makes it closer to say, Kunio Kun/River City Ransom than Double Dragon’s slightly-gritty-by-way-of-the-1980s aesthetic.

Straight off the bat there’s a challenge, of course, because classic Double Dragon was a three button game (Punch, Kick, Jump) and the NES (and indeed the Master System) only has two primary buttons. Sure, some of the dodgier or more broken arcade versions I played in the day sometimes had that issue too, but that was wear and tear, not by design.

Here the NES version does something that’s downright weird, and not exactly in line with the classic Double Dragon as it was.

There’s a rudimentary experience system, so as you play through the game’s missions, you gain “hearts” that unlock different attack styles that correlate to the attacks found in the classic arcade game.

That means by the end of the game you’ve got a wide array of moves, but at the start, you’re essentially only able to punch, kick, headbutt and jump by hitting both buttons. You can’t even do a jump kick, which you could do straight away on the Master System version! You just jump at enemies, who rather promptly punch you right in your Double Dragon. Ahem.

It gives the NES version a very distinct kind of challenge, and it’s one that’s equal parts welcome and annoying. Honestly, you can clear a lot of this game using well timed kicks only. Some of those moves that you learn along the way are more of a hindrance than a boon, and the classic elbow move that so many players relied on back in the day is seriously nerfed.

It’s fascinating to look at Double Dragon in the context of the other MSI games I’ve already reviewed, because by 1987, arcade games had come a long way.

While kicks are the most powerful and readily available attack, you gain new attacks and can use a variety of weapons along the way too. There’s something that’s eminently satisfying — and, to be clear, deeply nostalgic — about hurling a barrel at an enemy’s head, or carefully positioning them so they blow themselves up with their own dynamite.

Where Frogger and Space Invaders feature only a single game mode, Double Dragon offers a one or two player experience.

However, before you get too excited, it’s not two player in the way that the classic arcade game is. You can’t buy two of these things and link them together or anything like that.

Two player is simply sequential play, with the second player waiting until player one has lost their first life, and then alternating. If you’re in any way a capable player, that second player might be waiting a while to have the joystick passed to them.

Should you buy one?

Look, it’s very clear even from the box that this isn’t the arcade version of the game, and I’d definitely rate it much higher if it was.

Still, it’s a game that stands up as a fair amount of Christmas fun, even if it’s not quite arcade perfect. If you’ve got a family member with a strong nostalgic memory of Double Dragon — and I guess, specifically memories of the NES version — it’s actually pretty good fun stuff for the money. As cheap-ish Christmas gifts go, it’s a decent one.

I don’t know that I’ll play it a lot, but I could see far worse Christmas presents to get or to give. While Frogger is closer to its arcade roots, it’s a simpler game to present, and I’m genuinely torn as to whether I’d get this or Frogger if I could only buy one.

Next time: Woah woah… Wrestlemania. Combining my love of retro games and the fine “sport” of professional wrestling. What could possibly go wrong?