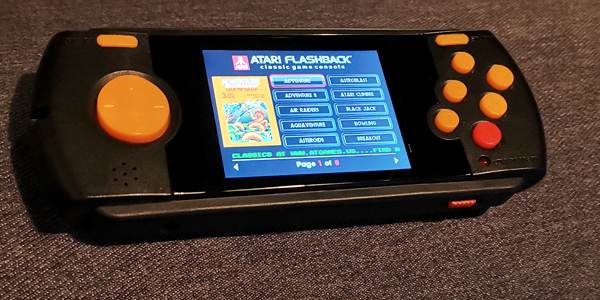 The somewhat notorious AT Games does, sometimes, put out a quality product. The Atari Flashback Portable isn’t great, but it’s good enough for a quick retro fix — and it might just be the best Atari licensed system you can buy.

This one’s been sitting on my review shelf for quite some time now, waiting for a moment of inspiration to strike.

It’s fair to say that ATGames does not (ahem) have the best reputation amongst retro gaming fans, and not without reason.

ATGames’ Flashback units have provided “official” emulation of a number of classic Atari and Sega Mega Drive (no, sorry Leigh, it’s a Mega Drive, not a Genesis*) games over the years, with either a weird choice of games, or bad sound emulation, or iffy controls… you get the picture.

Still, when the portable Atari Flashback came up for sale on Catch a few months ago, I was intrigued enough to drop a few dollars on one. I have a weird fascination with portable emulation systems, most of which are, frankly, terrible.

And there are things that are clearly wrong with the Atari Flashback Portable. For a start, it’s built on the hardware ATGames used for its portable Sega console (which it might have called the Genesis, but that’s still wrong*), so it has way too many buttons in a weird array.

Build quality is pretty cheap, from the tinny speaker to the clicky buttons. There are paddle-control games present, but there are no paddles or the ability to plug them in (which would, admittedly be a bit weird and non-portable).

On the plus side, it runs on a rechargeable battery, and a mini USB charging cable is provided in the box, so you won’t go broke finding AA or AAA batteries to keep it fed. Compared to the other Atari portable I own — the mighty Atari Lynx — that’s quite the refreshing change.

We now pause to remind you that, yes, that’s Tobey “Spider-Man before he was made out of sand” Maguire.

The Atari Flashback Portable boasts a whopping 70 games, although, like previous Flashback systems, there’s quite a lot here that you’re not likely to play twice unless you have very specific nostalgic memories of them. In order, they’re:

That’s quite the list, although there’s some caveats to add here. Frogger isn’t the arcade or Atari 2600 version, and neither is Pac-Man.

There’s a smattering of freeware/indie games in there, and before you get too excited, Strip Off isn’t one of those obscurely terrible “adult” games from the early 1980s.

Frankly, if you’ve never played Custer’s Revenge, then… you’re better off than I am. I wrote about Custer’s Revenge for PC & Tech Authority about a decade ago, but (sob!) it appears that the recent death of that mag took my column about it with it. Dammit.

Still, there’s fun to be had here, simply because so many early Atari games were arcade titles designed to be played for just a few minutes at a time, and that suits a portable format very well indeed.

I can happily load up Pitfall!, Yars’ Revenge or Millipede and blast away for a few idle minutes, put the Atari Flashback Portable down and be happy with my lot.

It’s mildly amusing, too that one of the buttons is for a dedicated B&W mode. Do you need it? No, you probably don’t, but it’s a nice little sop to the heritage of the system and the many older TVs that original consoles were plugged into back in the day.

The other fascinating factor that the Atari Flashback Portable brings to bear is the inclusion of an SD card slot.

Where the “full” Atari Flashback consoles are very much fixed storage games, ATGames quite happily lets you load any additional ROMs you’d like onto the system via the included SD card browser.

Atari games are, by definition tiny, so you don’t need any kind of large SD card to vastly expand your library. Yes, you could use them for pirated games, although again anything that needs a paddle won’t work, and online lists suggest some classic 2600 games won’t load anyway.

What I’ve enjoyed far more is the way that it’s introduced me to the wild, wonderful and above all weird world of Atari indie development, which celebrates the limitations and pushes the definitions of games within the technology open to the humble 2600.

Want an Atari 2600 version of Katamari? You can play it on the Atari Flashback Portable.

Same story with a weird (and borderline unplayable) Terrance & Philip (of South Park fame) game. Something tells me that one isn’t official in any way.

It can take some work sorting out how to play some of the games, but there’s a delightful vibe of creativity and madness in equal measure that makes them fun.

Ultimately, that’s what games should be, right?

The Atari Flashback Portable is still very much a retro nostalgia kick, but it’s pretty easily the best Atari system that ATGames has put out to date. That might not be that high a bar, but if you can get one relatively cheaply, it’s a recommended buy.